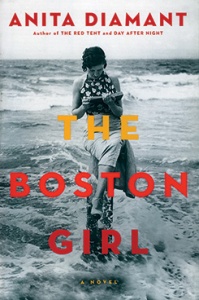 Anita Diamant’s The Boston Girl is Addie Baum’s long response to her granddaughter’s question about how she got to be the woman she is today.  Born to immigrant parents in Boston in 1900, Addie picks up the story in 1915, just shy of her fifteenth birthday.  She introduces us to her hardworking and quiet father, hyper-critical mother, and two older sisters – Celia, beloved deeply by both parents, and Betty.

I was only ten years old when my oldest sister, Betty, moved out of the house. I remember I was hiding under the table the day she left. Mameh was screaming how girls were supposed to live with their families until they got married and the only kind of woman who went on her own was a “kurveh.” That’s “whore” in Yiddish; I had to ask a kid at school what it meant.

After that, Mameh never said Betty’s name in public. But at home she talked about her all the time. “A real American,” she said, making it sound like a curse.

Addie’s experience as the daughter of immigrants rings true to the experiences many of us had coming of age with parents who may have been born and raised in this country, but still were a bit more conservative, more traditional, more wary of the world than our friends’ parents. Addie’s oldest sister is the bad influence, an example of what happens when a young woman who’s been raised well is tempted and whisked away by the evils of American culture. The middle child is the peacemaker in the family, sometimes banging her face on the table to get her parents and younger sister to stop arguing, making sure that she never does anything to disappoint her parents or cause them stress. Addie wants more than anything to get away from the restrictive, stifling atmosphere of the home in which she’s been raised, and get out she finally does.

Her first escape is into her education, where she finds her love of reading and fights to be permitted to attend high school rather than sent into sweatshop factory work like her older sister.  She then escapes into a reading group, which leads to lifelong friendships and chances to take longer (and farther) trips away from her family, learning for herself who she is and what she believes. She pushes boundaries, sneaks around with romantic partners, finds people who encourage and inspire her, embraces controversy, discards the things from her childhood that don’t resonate with her, and makes her mother crazy.  She is, in short, a teenager. Bright-eyed, defiant, and full of conviction, Addie is easy for the reader to love. Her story moves quickly, each section consisting of several chapters covering a two year period. The largest section is devoted to her teenage  years, and with good reason, because those are the years she credits most as making her who she is.

I liked to think of myself as smarter than most girls, but I had talked myself into believing I was in love with a man who thought I was easy, who insulted me, who was ready to force me. So stupid.

The thing is, I should have known what kind of man he was from when we were on the dance floor. When Harold leaned down to tell me to meet him on the porch, he – I can’t believe I’m saying this to you – he stuck his tongue in my ear. I was disgusted that anyone would do such a thing, but I was also thrilled – from one end to the other, if you know what I mean.

But even after that night in the doorway when I had bruises all over my back? Even then I kept fooling myself.

I’m still embarrassed and mad at myself. But after seventy years, I also feel sorry for the girl I used to be. She was awfully hard on herself.

The Boston Girl is funny, resonant, sad, and hopeful in all the best ways an honest conversation with a grandparent can be. It’s a quick read, with characters you’ll likely see yourself and your friends in, and would be a great pick to read with a friend or relative raised in a different era from yourself.  If you get the chance to read it in the next two or three weeks, I invite you to join us in mid-November for our Bookish meeting to discuss it.  If you’re interested, email me at gplbooks [at] gmail [dot] com and I’ll be sure to send you the details and save you a seat.

The Boston Girl is available now at Greenville Public Library.