Jenny Lawson, better known by her online persona The Bloggess, is just damn funny. Of course, if you’ve been reading her incredibly popular blog for very long you already know that. Lawson writes about her own multiple neuroses (she has more acronyms after her name than Neil deGrasse Tyson, except hers are diagnoses and not doctorates), domestic kerfuffles, and taxidermy. She writes with frantic, off-kilter, often irreverent wit that is impossible to imitate. Her first book, Let’s Pretend this Never Happened, spent a couple months on the New York Times best sellers list when it debuted in 2012, and her new book Furiously Happy hasn’t left that list since it released at the end of September.

My wife and I recently traveled to nearby Dayton to attend a reading and signing Ms. Lawson was conducting at Books & Co. The line for signing tickets snaked around the cavernous store over an hour before the reading began, and when the event area opened it quickly filled with an assortment of delightfully eccentric Bloggess fans. Some of them even brought their own ethically taxidermied animals, which sounds weird unless you understa–well, no, it’s weird either way, but not in a bad sense. These people are Lawson’s tribe, a tribe she has nurtured and brought together and given permission to be their gloriously weird selves.

Lawson’s gift is in laying her mental health issues bare, bravely sharing about her depression, anxiety, and other mental health problems while never being less than blisteringly funny. When she reached the podium in front of the enthusiastic crowd she confessed the severe anxiety that sometimes provokes panic attacks during public readings and told us she would do her best. My guess is that many or most of those present (my wife and I included) have anxiety issues or associated problems as well, so this was met with understanding. She began by expressing excitement and surprise that Furiously Happy was now in its fourth week on the New York Times best sellers list with the following quip: “I mean, I see Mindy Kaling’s book, and everybody likes Mindy Kaling, so that makes sense. And there’s that O’Reilly guy (crowd groans), and then there’s my book with a dead raccoon on the front. What?”

She read two chapters from her book, both showcasing her blazing humor and baring honesty. In a portion of one of these chapters she discusses her penchant for passing out at inopportune moments, in this case on a grade school field trip to a hospital in which she was not supposed to be a patient.

“Honestly I didn’t know why I’d passed out. My baseline of anxiety remained the same but my subconscious was apparently so terrified that it had decided that the safest place for me to be was fast asleep on a floor, surrounded by bedpans. Which sort of shows why my body is an idiot, because forced narcolepsy is pretty much the worst defense ever. It’s like a human version of playing possum, which is only helpful if bears are trying to eat you, because apparently if you lie down in front of bears they’re all, “What a badass. I attack her and she takes a catnap? I probably shouldn’t fuck with her.” – page 3 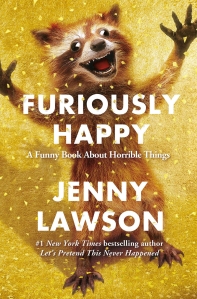 Another story relates the time her cat swallowed its ticklebell toy and then proceeded to pass only the tinklebell portion, which was still attached to the rest of the toy…inside the cat. The cat now had a bell hanging from its butt and was understandably scared to death. She got a pair of scissors to try to cut off the bell, but the cat was terrified and kept running away from her. She wasn’t sure at that point of it was because of the bell or because the cat was being chased by a woman with scissors yelling, “Come here I’m trying to help you!”

In an extended question and answer session she responded to questions about writing, mental health, marriage, and, of course, taxidermy, and then the signing began, which lasted for hours. Ms. Lawson refuses to rush these signings, spending time in conversation with each person who comes through the line, taking silly pictures, and writing personal and often profane inscriptions in their copies of her books. Her writing has helped a lot of people who have felt isolated by their mental health problems, and she never wants to miss the opportunity to connect with them. I can only assume she goes home from these events utterly exhausted. The reading began at 7 p.m. and the signing was still going strong when we left around 10.

If you haven’t had the chance to read Jenny Lawson until now, please do so. Check out her blog, and then head into GPL to reserve Furiously Happy. You won’t regret it. Unless you’re offended easily. Then you might regret it, but you’ll be missing out.