(Book Review) Worlds of Ink and Shadow by Lena Coakley 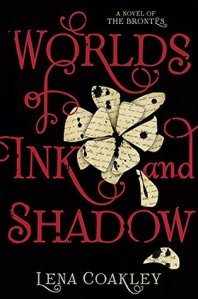 I have a weird relationship with novels that fictionalize the lives of writers. Years ago, I tried to read a book in which Oscar Wilde was solving mysteries or something, and was unable to read past the first few chapters. Naomi Wood’s Mrs. Hemingway, on the other hand, swallowed me up and spat me out at the end far more fascinated with the marriages of ‘Papa’ than I’ve ever been with his actual writing.

So it was with a little trepidation that I approached Worlds on Ink and Shadow by Lena Coakley (Amulet Books, January 2016), a fictionalized account of the childhood of the Brontës, including the oft-overlooked Branwell. As a reformed angsty teenager and adult residing near their birthplace, I feel a certain and possibly irrational degree of protectiveness over the Brontës, so this was a particularly risky choice of reading material. But I am very happy to announce that I had no need to worry; Coakley’s rendering of Charlotte, Emily, Anne and Branwell is imaginative and convincing.

The eponymous Worlds of Ink and Shadow are the “imagined worlds” of the Brontës’ juvenilia, and Coakley utilizes the creations of the siblings brilliantly, encompassing Verdopolis, Angria and Gondal: the places the Brontës really did create in their childhoods. Like most students of their work, I have always marvelled at how the Brontës, living such a limited existence, were able to conjure up such vivid narratives in their novels, and Coakley creates a glorious answer to this question: in Worlds of Ink and Shadow, the Brontës literally “cross over” into their fictional landscapes, although this comes at a cost. I wasn’t fully aware of the fantasy element of the novel before beginning to read, and I’m glad of this as it may have put me off; in fact, this aspect of the book is beautifully executed.

“Isn’t it remarkable,” Anne said, “how one can become attached to fictional people.” She looked at Emily with large violet-blue eyes. “The feeling might become quite strong, I expect.”

The thing I liked most here was the way in which Coakley injects aspects of each sister’s works into their characters. Charlotte is austere and repressed, like Jane Eyre; Emily is wild and passionate, like Catherine Earnshaw; Anne is withdrawn and resigned but steadfast, like Agnes Grey. I don’t think you need to have read each of these novels to enjoy Worlds of Ink and Shadow, but familiarity with them certainly allows you to smirk at the occasional inside joke.

“What I mean is,” Anne continued, “there is no shortage of reading material in this house. Charlotte is an excellent writer, but Mr. Shakespeare is better and, if it’s Branwell’s wickedness you like, Papa says we may read Lord Byron in moderation.”

The yearning of each of the Brontë children to exceed their current situation is palpable, with the imagined worlds clearly serving as an escape from their mundane and isolated lives, which had also been steeped in tragedy by the death of the two oldest sisters. Their reading, writing and imagining has only increased their dissatisfaction, with Charlotte claiming, “if I’d never known there was more to life, it would have been easier to be content with what I have.” In some ways, their suffering is that which is universal to adolescents: longing for the next adventure or, in the case of the Brontës, any adventure at all.

The way in which Charlotte, Emily and Anne are depicted here matches my own thoughts; when I have walked the corridors of the Brontë Parsonage in Haworth and wondered about the lives of the girls, this is what they sounded like. Anne gets all the best lines, something that made me wonder if Lena Coakley shares my view that she is the best Brontë, with The Tenant of Wildfell Hall vastly exceeding Jane Eyre in its appeal. Emily’s tempestuous character is similarly convincing, while there is both pathos and humour in Charlotte’s musing over whether she will “end her days in a madhouse, or locked in an attic somewhere, unable to tell the difference between fantasy and reality.”

Coakley’s novel is genre-defying in its scope: part historical novel, part fantasy epic, part ghost story. Even knowing the eventual fate of the Brontës, this book surprised and delighted me, as it will any fan of the sisters and their work.

Worlds of Ink and Shadow is available now at GPL.