(Film) Man on a Tightrope

Man on a Tightrope is one of director Elia Kazan’s most underrated films and one of his best. The film’s title has more than one meaning–the main character is a circus clown who very literally works on a tightrope in some of his routines, but he is also the leader of this circus, and the circus is coming under scrutiny from the communist police where the circus operates in Czechoslovakia in 1952, so he must also walk a narrow line between

maintaining artistic integrity and not upsetting the authorities. This man is Karel Cernik–played with tremendous gravity and pathos by Fredric March–and his family owned the Circus Cernik for generations until the communist state took over ownership with the rise of their regime, though Karel has been permitted to continue management. However, police investigators and propaganda officials keep a close eye on him and infringe on his artistic freedom, asking him to alter routines to include pro-communist propaganda. As pressures tighten, Karel and his confidantes must decide if the time has come to try to escape into American-occupied Bavaria, risking the lives of their troupe members but hopefully granting them freedom and a new life.

With dwindling funds the circus equipment is in disrepair and morale among the troupe members is at an all-time low. To complicate matters, there is a mole in the operation, since details of Karel’s private conversations keep reaching the police. He and his comrades can’t wait any longer to try to escape, so they hatch a nearly suicidal plan to break through a checkpoint at the border in broad daylight rather than trying to sneak across secretly at night. Suspicion, distrust, and disagreement over the details of the plan within the small group threaten to derail everything even if the authorities don’t catch on and bring an end to their plans. Additionally, Karel’s young adult daughter has fallen in a love with a man he doesn’t trust, and his wife (played by the singular Gloria Grahame) is losing respect for him, so the pressures pushing in on him are personal as well as political. 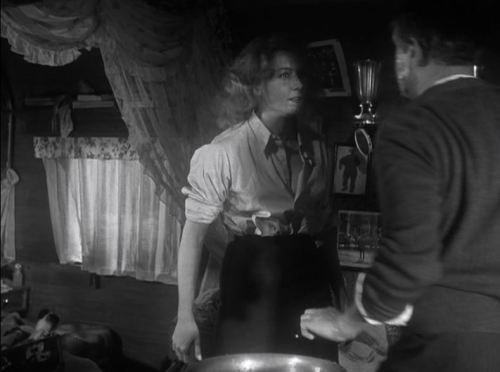 Fredric March’s performance as Karel Cernik is one of the best of his career. His emotion–moving between fear, affection, anger, amusement, and others–is believable and subtle in a film that arrived just at the onset of Hollywood method acting, a movement March was not really a part of. Kazan, however, was an actor’s director, one who showcased actors who ushered in the method style, such as Marlon Brando and James Dean. He brings the best out of the formidable March here, giving the actor room to work but providing beautiful setups in which to do so. There are even scenes of humor, in particular one in which Karel and the leader of a rival circus must fake a fight to allay suspicion about their meeting.

Man on a Tightrope combines action, suspense, humor, and personal drama to provide one of the best films of the 1950s, though one that is deeply underappreciated. Existing in the shadow of some of Kazan’s more legendary films such as On the Waterfront and A Streetcar Named Desire, this film shows every bit of Kazan’s flair for dramatic tension and allowing his actors to showcase their skills. It is a beautiful film.

Please join us on Thursday, February 18, as we screen this classic film as part of our Third Floor Film Series at GPL. Fresh popcorn, candy, coffee, and soft drinks will be provided, and I will be leading a short discussion after the film. I hope to see you there.

Leave a Reply to Man on a Tightrope | David Nilsen, writer Cancel reply