(Book Review) The Woman Who Married a Bear by Tiffany Midge 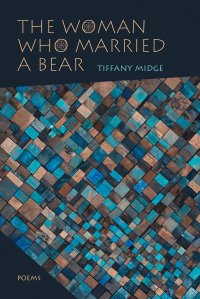 The Woman Who Married a Bear by Tiffany Midge, a poet of mixed white and Lakota heritage who is an enrolled member of the Standing Rock Sioux Reservation, is a collection that is quiet with its themes, but far from soft. Its confessions and protests are whispered more often than wept, but under the surface, the spirit of these poems is sturdy and unmoving. Throughout the collection, Midge weaves Native American mythology into poems about modern day life and love, combining the ancient with the contemporary, the ethereal with the quotidian.

A good example of the tension Midge explores here is found in “A Postcolonial Irony,” in which she and a friend are sitting in a coffee shop reading postcolonial texts for a class, discussing white privilege, imperialism, and related ideas. In walks a woman from the nearby reservation, disheveled, her appearance giving silent testament to years of heavy smoking and drinking. She asks if anyone knows where the nearest bar is. Midge here explains her friend is white and blonde and she herself, while half Lakota, passes for white. They are both nicely dressed, sitting over important books and new laptops, discussing the colonial past when a woman walks in the door and unceremoniously confirms a cliché intimately consequential of that heritage.

This poem in which Midge scrutinizes her own privilege comes after a series of poems in which she spotlights the exploitation of Native American culture. In one poem, she comments on the irony of getting stuck behind a semi owned by the Mayflower company while driving in the mountains near her reservation. One poem expresses her frustration with the trinkets and collectibles she finds in an antique shop that cash in on broader America’s fascination with the very native cultures their ancestors forced off the land. Another examines the U.S. military’s choice in code-naming Osama Bin Laden Geronimo during the 2011 mission to kill the notorious terrorist. Another looks at the discrepancy between how pairs of shoes are displayed in the Holocaust Museum and a gallery of Plains’ Indian moccasins:

The portrait is clear:
one is art
the other evidence.
One is artifact
the other atrocity.

She parses the connotations of the two exhibits, how one is unquestioned as a testament to human rights violations and genocide, while the other is co-opted as part of a shared national heritage rather than evidence of similar crimes.

She had a lover whose eyes were black hooks
that pierced her heart into the darkling of his body-
then winched it out, a spent, stained prize,
a captive of his scars, his mother’s blood.
…
who hungered for her shoulders, her mouth, her belly-
who fed on the pounding in her chest.

In “Identifying the Beast,” she opens with:

You have listened
for those webbed shadows
casting their stitch
through the house of your body-
thin as a paper cut,
dark as a spider’s eye

Lines like these that blend the sensual with the spiritual in Midge’s self-examination imbue the collection with a grim beauty that reminded me in some ways of Diane Seuss’ work in Four-Legged Girl.

There is a series of ten poems spread through the book all titled “Considering Wakantanka.” Wakan Tanka is a Lakota term for divine and sacred truth, sometimes used to refer to the idea of The Great Spirit (the only concept most white Americans are familiar with from Native American religion and mythology), but more accurately indicating The Great Mystery, a term that encompasses the divine and sacred threads that run through all things. These poems are short vignettes that describe coincidences, ironies, moments of poignant emotion or meaning in the poet’s life. At first glance, these poems seem unrelated to either each other or their title. Upon reflection, though, Midge is describing a spirituality of the everyday, a way of seeing the divine in moments both mundane and monumental in our life. In one of these, she writes about trying to leave the hospital after a family member has been taken off life support, only to be stopped by a small girl who excitedly tells her their family just had a baby. In one, she movingly describes her grandfather busying himself “with the serious labor of dying,” while in another, she talks about a possible cosmic vengeance upon a lover’s ex. These poems are minor, but woven throughout the book as they are they give us a window into Midge’s spiritual and holistic view of life.

The Woman Who Married a Bear is a book that works both with and against our expectations. Tiffany Midge shows us the life of one woman but balances that life against the struggles, triumphs, and ongoing hardships of a people who paid the spiritual mortgage on a land that was then taken from them. These poems quietly but profoundly call us to listen and observe.

The Woman Who Married a Bear is available now at Greenville Public Library.