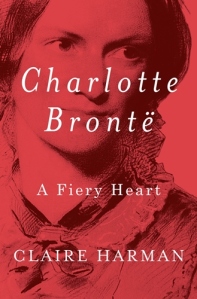 If, like the eponymous heroine of Charlotte Brontë’s most famous novel, you have no possibility of taking a walk today, please allow me to gently point you in the direction of a comfy chair and Claire Harman’s bicentennial biography of the author. I confess to harboring feelings of ambivalence towards Charlotte; while I admire Emily’s wildness and like to imagine Anne just rolling her eyes at her melodramatic sibling, I’ve always thought Charlotte to be the boring one of the three, piously judging anyone who dared to enjoy themselves. I am not ashamed to say Harman’s biography has forced me to rethink my viewpoint.

Charlotte Brontë: A Fiery Heart (or A Life, as it is less excitingly subtitled in the UK) is an impressive work of biographical writing, managing to combine the well-known aspects of the Brontës’ claustrophobic existence with more obscure minutiae. Having now read and reviewed about 67 Brontë-related tomes for Fourth and Sycamore, I consider myself an armchair authority on the sisters, but I learned a great deal from Harman’s book. No student of the Brontës will be unaware of the tragedies that befell the family during the formative years of the famous three; their mother died while Anne was just a baby and the two oldest sisters, Maria and Elizabeth, both contracted fatal cases of consumption before reaching their teens. Harman’s account begins with Patrick Brontë’s early years before covering his marriage to Maria Branwell (they met while Maria was working at the school at which I teach: a fact I particularly enjoy), the building of their family, and, all too soon, the death of nearly half the household. Framed through the eyes of young Charlotte, too responsible not to internalize the grief of all those around her but too young to know how to process it, these early chapters read like the nineteenth-century novels central to Harman’s subject.

Charlotte herself is treated sympathetically but not cloyingly by the writer. Her awkwardness in company is often alluded to, but this is balanced by the immense courage she showed in fighting for the publication of her own and her sisters’ works. Harman gives the requisite attention to Charlotte’s time at Roe Head, the school at which her older sisters perished, and these scenes will resonate with devotees of Jane Eyre, with their obvious similarity to Jane’s time at Lowood. I was particularly interested in the chapters devoted to Charlotte’s period of employment in Brussels, which served as the inspiration for both The Professor and Villette. Harman quotes liberally from Charlotte’s later correspondence with Monsieur Heger, her tutor and obvious object of her affections, and these letters provide justification for the book’s U.S. subtitle; the heat of Charlotte’s fiery heart, to me, exceeds even that of her most famous protagonist, with the pain of rejection  giving way to intense pride. Harman covers other misfires in Charlotte’s limited romantic overtures, and each one served to turn my ambivalence towards Charlotte to deep empathy.

‘Un peu d’intérêt’: sadly, it would indeed have sufficed Charlotte to have any word or friendly gesture from Heger at this stage, if only to perpetuate her hope in the recovery and regrowth of their relationship, but she deceived him, and herself, by suggesting that mere crumbs would suffice for long. – page 188

Inevitably, the other Brontë siblings feature heavily, with Harman offering some fascinating insights about Emily, in particular. Harman recounts a story in which Emily, bitten by a dog, “went straight to the kitchen and cauterized the wound herself with one of Tabby’s smoothing irons” (page 169), showing her to be the mad genius we know and love. The impact of living with Branwell–self-styled Byronic hero, opium-addict, and drunk–is constantly evident, but his portrait here is cautiously sympathetic rather than entirely condemnatory; it is clear that, like his rigid yet unpredictable father, Branwell did little to ease the anxieties of his sisters. While reading of the Brontës’ childhood, I was reminded of Lena Coakley‘s YA novel, Worlds of Ink and Shadow, which retells the story of that period in a way which, if we hold it up against A Fiery Heart, is extremely accurate. Like Coakley, Harman devotes a great deal of attention to the juvenilia of the Brontës, and, more interestingly, makes it clear that these writings continued long into adulthood.

Harman undoubtedly has a fascinating subject with a rich supply of material, but her own style is irresistible in both its scalpel-like precision and its immense warmth and affection. At times almost forming a dialogue with Mrs. Gaskell’s famous The Life of Charlotte Brontë, Harman’s work interrogates previously accepted “facts” about the Brontës and exposes them to further scrutiny. In a gloriously meta fashion, Harman also follows the developing friendship between Brontë and Gaskell, as well as the latter’s process of gathering information for her biography in the wake of Charlotte’s death. As I became immersed in A Fiery Heart, I enjoyed reading between the lines of Harman’s imperious prose to deduce her informed viewpoints on some of the other players in the lives of the Brontës; Charlotte’s great friend Ellen Nussey, for example, does not receive an entirely favorable portrait, and the late arrival of Arthur Bell Nicholls, the eventual husband of Charlotte, adds Brontë-like drama to the book’s denouement.

A surprisingly large amount of pages pass by before the major works are discussed, emphasising the immense tragedy of the early deaths of Emily and Anne, in particular; it is no spoiler to mention that these two and Branwell died within months of each other, and the chapter in which Harman deals with these events is as affecting and harrowing as anything I have read this year. Charlotte’s obstinate belief in the value of her own writing is admirable, although I wish she had been able to appreciate her sisters’ work for the masterpieces we now know them to be.

Dear reader, I could continue typing for several hours about the many, many values of Charlotte Brontë: A Fiery Heart, but your reading time would be far better spent with Harman’s book than my own ramblings. Any fan of the Brontës would be very well-advised to pick up a copy and choose a suitably drizzly day to spend with it.