These poems were written when I was in residence at Gullkistan Residency for Creative People in Laugervatn, Iceland. I shared an apartment with a friend, also a writer, overlooking a lake with a giant volcano looming above it. I was already far from home, but I often like to go out to write so I’d walk a few blocks to the local hotel and have a snack or lunch. These poems were written simply in a notebook over a cup of tomato soup or coffee. It was still just the start of summer, so quiet. Once we stayed up until 2 a.m. talking without realizing it because it was still light out.

A Rainy Thursday in Laugervatn

and the umbrella I transported for thousands of miles
turns insideout 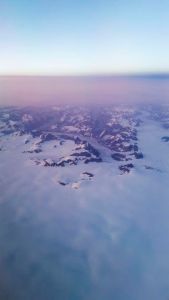 shows its ribs
like a beached decaying pilot whale

and reading a saga
in the hotel edda

sitting in a ferry terminal
about to embark

and the artist tells me
if I understand correctly

of the tall woman
with enormous outspread wings

Lunch At The Lake 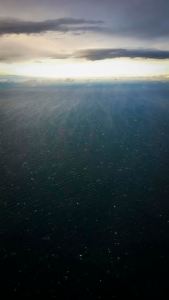 The young waitress
is named Miriam Petra
I tell her
Miriam is my name
She is half-Icelandic and half-Egyptian
she tells me Petra means rock
and Miriam beautiful one.

In Hebrew, Mir is bitter,
I know my name means rebellion.
A small chocolate
comes with the coffee,
a tiny chip in the cup.
I’m all alone
in the dining room
watching the rain
come across the lake
as if nothing had ever happened to me.

Miriam Sagan is the author of 30 published books, including the novel Black Rainbow (Sherman Asher, 2015) and Geographic: A Memoir of Time and Space (Casa de Snapdragon, 2016). She founded and heads the creative writing program at Santa Fe Community College. Her blog, Miriam’s Well, has a thousand daily readers. She has been a writer in residence in two national parks, at Yaddo, MacDowell, Colorado Art Ranch, Andrew’s Experimental Forest, Center for Land Use Interpretation, Iceland’s Gullkistan Residency for creative people, and another dozen or so remote and unique places. Her awards include the Santa Fe Mayor’s award for Excellence in the Arts, the Poetry Gratitude Award from New Mexico Literary Arts, and A Lannan Foundation residency in Marfa.