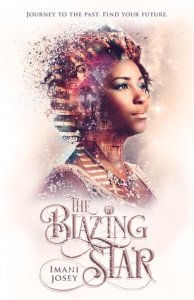 There are many certainties to be found in a visit to my parents’ house. There will be cake. Grandchildren will be indulged. My dad will fall asleep on the sofa, often halfway through a sentence. And, most crucially, at some point during my stay, someone will find the movie The Mummy on an obscure satellite channel and I will be forced to watch it from whatever random point the narrative has reached at the point when I enter the room. What this means is that I have experienced The Mummy in all its pseudohistorical bombast on numerous occasions, without ever having actually seen the whole film; a problem presumably shared by my father, because, as previously mentioned, he’s probably asleep.

The family’s inexplicable passion for Brendan Fraser’s Indiana Jones-aping antics mean that they are would be fairly likely to enjoy Imani Josey’s The Blazing Star, a riotously entertaining and completely mad time travel adventure in which teenager Portia is transported from modern day Chicago to ancient Egypt, thanks to a mysterious scarab and some baffling chronological gymnastics. At this stage, I must confess to having a very complex relationship with time travel. On the one hand, I love it; invariably a time travel story will teach me something about history, or take me to a place I’ve never been, or have been written by Ray Bradbury, and these are all delightful things. On the other hand, I possess an entirely willful inability to think in terms of maths or science, so the explanations for how said time travel has occurred largely elude me. My preference is a Macguffin-led narrative, which requires no actual science and, instead, merely a willingness to believe that an everyday object (a scarab, say, or hot tub, perhaps) has whisked everyone back in time. So Imani Josey earned a round of applause when she elected to use an ancient Egyptian ornament as the means of moving the story along.

No sooner had the scarab touched me than heat tore through my body again. It was wild electricity, my limbs like crackling wires. My sister’s screams were muffled as I reached for her hand, her image breaking into shards of light. Maybe the museum shook, maybe it was just me, but as she grabbed my hand, Selene surprisingly took the other. It was the last thing I saw as this sudden death reconfigured every inch of me in writhing pain.

Our narrator on this crazy, accessory-influenced journey is Portia, the average twin sister to exceptional Alexandria. On a field trip to a history museum, Portia finds herself being adorned with a scarab necklace; the next thing she knows, she’s waking up in ancient Egypt, miraculously able to overcome the language barrier and swiftly plunging into a world of political intrigue, featuring royal weddings, high priestesses, and see-through robes, apparently worn by all discerning fashionistas in the ancient world. The historical part of the book is a riot, with knife-wielding priestesses, killer scorpions and a widespread sense of conspiracy, and if you can’t find enjoyment in all that, then you probably shouldn’t watch The Mummy.

In some ways, The Blazing Star reminded me of another recent YA fantasy: Labyrinth Lost by Zoraida Córdova. Both novels center on a teenage girl, suddenly transported to an unfamiliar land and tasked with a seemingly impossible mission. Josey’s novel benefits from its unfamiliar land at least being recognizable; I’m not sure whether a vast knowledge of ancient Egypt would have enhanced or ruined the reading experience, but I found my grade school level knowledge of the period more than up to the challenge of picturing the setting. I’ll also put this out there: I’ve read a lot of books and this was the first that took its characters into conflict with a pharaoh, so Josey gains top marks for pushing that envelope.

I’ve previously bemoaned the dominance of “the chosen one” as a trope in YA fantasy fiction, and Josey cleverly has Portia denounce this herself, proclaiming at one point, “I’d always wanted to be a special snowflake, especially once I discovered I had a genius for a twin. I wished I’d really evaluated that desire now.” Yes, Portia suddenly discovers previously untapped powers, and yes, she is lauded by those around her for these abilities, but she’s also entertainingly sarcastic about the whole affair; her befuddled yet snarky first person narration read, to me, exactly how it would sound being inside the brain of a teenager who awakens several thousand miles from home, a few thousand years ago.

Sikara removed a small blade from her robes and handed it to me. I held it out like rotten fish. “What am I supposed to do with this?”
“You’re so strange,” she said, as the pair turned to leave. “I always love a new sword.”

The Blazing Star does a number of other things I really liked. The story is replete with interesting, unpredictable, and borderline psychotic women, and, although there is a romantic undercurrent, it’s by no means the most dominant part of the novel. I also enjoyed the comic juxtaposition of the historical setting and Portia’s modern perspective; for example, if the High Priestess “managed to live about three thousand years, she could easily play for the WNBA.”  It’s a neat way to acknowledge the sense of temporal displacement without tedious narration over worrying about how to get home. Although Portia’s general lack of concern for small things like, for example, how she ended up in the wrong millennium or how to get back to the right one seemed a little odd, I found myself swept up in the adventure, which I think accounts for the character’s insouciance too.

Appropriately, given its premise, I found The Blazing Star to be rather supervising a particularly raucous school trip. I wasn’t always entirely sure what was happening, and occasionally I forgot everyone’s names, but, at the same time, I learned things and felt like I’d had a pretty good time by the end. It’s an enjoyably delirious read.