(Book Review) The Girl Before by J.P. Delaney 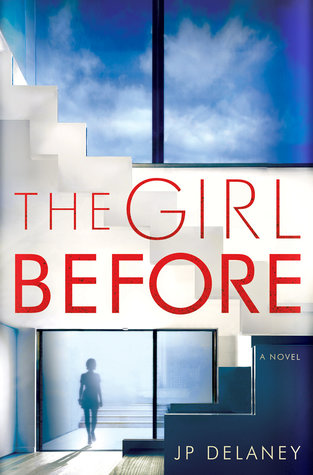 I’m not sure what it says about society when Gone Girl, The Girl on the Train, and The Girl Before become international bestsellers and popular feature films. They are deeply disturbing novels featuring narrators who are at best unreliable and at worst pathological liars. The plots bend toward men preying on vulnerable women and all feature pregnancies that are used almost as part of a game. The books follow a similar narrative structure, as if the authors are building on each other’s efforts, or, to put it uncharitably, stealing from one another. I also find the use of a female diminutive in all three titles curious—does this say something about the authors’ opinion of women? Or do the publishers think that using “girl” in the title is a good way to attract interest in the book?

The most recent entry in the “girl thriller” category is J.P. Delaney’s The Girl Before. Of its four main characters, only one comes out relatively clean. The first is the aforementioned habitual liar, the second is a narcissistic perfectionist sociopath, and the third is a murderer. The fourth has been deeply affected by her experience bearing a stillborn child, and she uses one of the men as a means by which to have a second child and ultimately win out over her lover.

I was intrigued by Delaney’s premise of an architect who has built a minimalist house that he insists on the occupants’ keeping absolutely pristine. As something of an architectural enthusiast, I had hoped that there might be more emphasis on this aspect of the story. The house, One Folgate Street in London, is a triumph of minimalist design and is the ultimate “smart home.” I assumed that, as I read, I would discover that the house is somehow controlling its residents, and to some extent, this is true. Jane, the present tenant of the house, muses as she looks about her surroundings for the first time:

“What I take from this house isn’t just that it looks nice. It’s how much commitment has gone into it. I mean, it’s uncompromising, obviously; even a bit brutal in some ways. But this is someone who’s put everything, every ounce of passion he has, into creating something that’s one hundred percent as he wants it. It has—well, it’s a pretentious word, but it has integrity. I think he’s looking for people who are prepared to be equally honest about the way they live in it.”

As it turns out, it is not One Folgate Street and its smart technology that have control issues, but rather the architect, Edward Monkford. He has a habit of renting his house out to women of a particular physical type, whom he calmly seduces into what he refers to as an “unencumbered relationship.” This means a primarily sexual one, with no trappings of romance, which can be broken off at any point he feels it isn’t “perfect.” He is an icy piece of work, and I kept wanting to scream at the two women tenants and tell them that they’re putting themselves in terrible danger, but all they seem to see is his physical attractiveness, assertiveness, and prowess in the bedroom. I mean, the fact that Monkford readily admits that he’s buried his dead wife and child under the house should be warning enough, shouldn’t it?

Our narrators, the female tenants, occupy the house at different points in time and take turns relating the story. Emma (the “girl before”) tells us that she has experienced a break-in and sexual assault at her old flat, and she moves into One Folgate Street with her boyfriend, Simon. The present occupant, Jane, is hoping to rebuild her life after the death of her baby and views the house’s stark simplicity and complex rules about clutter as a possible fresh start. The fact that Monkford preys on these traumatized women makes him even less attractive.

Shortly into the story, Emma breaks up with Simon, at which point Monkford steps in and announces that he will make love to her, which she readily agrees to. Literally, it’s as simple as that. He buys her an expensive pearl necklace and a designer dress, which might seem romantic, but when he later buys exact copies of these for Jane, who also quickly consents to sleep with him, it becomes downright creepy.

The central plot question in The Girl Before concerns Emma’s death in a fall down a dangerous staircase at the home. Was it an accident? A suicide? Or even a murder? Jane takes it upon herself to investigate after finding indications that Emma was sleeping among the rafters of One Folgate Street. Despite Edward’s warnings to stay out of the affair, she doggedly continues her search for clues in secret.

Jane, when she first realizes that the death may have been more than an accident, visits Emma’s psychotherapist, Carol Younson, and manages to extract information on Edward’s relationship with Emma. It is here that we first learn some of the psychological aspects of the architect’s personality:

“Freud talked about something he called repetition compulsion. That is, a pattern in which someone acts out the same sexual psychodrama over and over again, with different people allotted the same unchanging roles. At a subconscious or even a conscious level, they’re hoping to rewrite the outcome, to perfect whatever it was that went wrong before. Inevitably, though, the same flaws and imperfections they themselves bring to the relationship destroy it, in exactly the same way.”

Despite this warning, Jane won’t hear a word against Edward, and she continues to see him. It was at this point that I was about to give the book up as a lost cause because it was making me nervous even to pick it up. I was desperately hoping that Jane would have common sense enough to tell Edward to take a flying leap and to move as far away from the house as possible. But she doesn’t.

However, there are a couple of twists about two-thirds of the way through in which we discover that things aren’t quite as they seem, and which made me tackle the novel with renewed interest. Jane’s investigation continues, and developments in this eventually empower her to break Edward’s hold over her. And though Edward is indeed a creep of the first magnitude, he isn’t the only person playing deadly games with the two women.

Ballantine is coy about the author’s identity, listing J.P. Delaney only as the pseudonym of someone who has written several award winning books. It appears that his real name is Tony Strong, a Ugandan-born author, who says in a New York Times interview that he was interested in examining the world of minimalism, which he terms “weird and deeply obsessive.” He does indeed succeed in that, but he delves into a lot more psychological issues, many of which readers will find alarming.

I’m on the fence about recommending The Girl Before. If you like novels in which people’s dirty secrets are unearthed, and if you have a stomach for some degree of graphic sex, then you will probably enjoy it. It is definitely well-researched in all the areas it touches on: architecture, criminal law, psychology, obstetrics, and even exotic foods. Delaney’s book is also tautly written, though I think the plot resolves itself a little too rapidly in the end. However, if, like me, you have reservations about reading about psychopathological perversions, then you might want to give this one a miss. In either case, it may be difficult to avoid completely, as the film version is already in the works, with no less a luminary than Ron Howard as the director.

The Girl Before was published in January 2017, and is available now at Greenville Public Library both in print form and as an audiobook.