(Book Review) No One Can Pronounce My Name by Rakesh Satyal 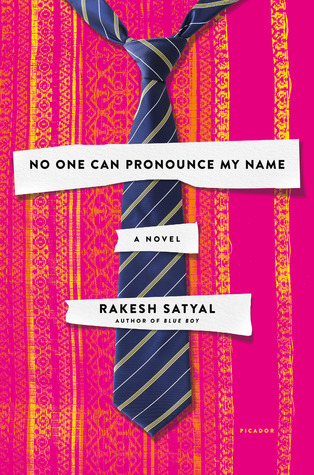 The title of Rakesh Satyal’s new novel comes up again and again during No One Can Pronounce My Name, with its focus on a community of Indian Americans, long-settled in Cleveland yet continuing to struggle for true acceptance. The novel begins with Harit, a man in his forties, trapped in a lonely life after the death of his sister; left to care for his visually-impaired mother, Harit dresses in a sari to allow her to continue to believe that his sister is alive. In the book’s other major plot strand, having sent her son to college, Ranjana tries to immerse herself in writing, which serves as a useful distraction from her fears that her husband is having an affair. When Harit and Ranjana’s paths cross, it seems that they can help each other in their personal struggles.

No One Can Pronounce My Name is charming and sweet rather than action-packed; it’s deep into the novel before Harit and Ranjana even meet, which means there’s a large amount of character development and the pace is leisurely, to say the least. Once I became accustomed to the slow build-up, I settled in and enjoyed getting to know these characters, whose different losses force them to readdress their own identities, sometimes in opposition to the persona society expects of them as Indian immigrants. Harit’s story is particularly well-developed; so low-key as to be almost unnoticeable at the outset, the emotional pain in his home-life and social agony in his job and friendships develop subtly to create a character the reader comes to really care for.

It was one thing to espouse a feeling, an idea of companionship. But it was another thing entirely to imagine a life that was informed by the presence of another person and that person’s affection. Had he ever imagined calling his wife to see if she could stop at the grocery store on the way home? Had he ever imagined holding the eyelid-soft crook of her arm as they discussed having children? The horrible conclusion was that he had never thought of what it would be like to negotiate one’s physicality to that of another human being because he had not thought it possible.

Although there’s sadness, isolation and awkwardness in the everyday lives of both Harit and Ranjana, there’s also plenty of humor in Satyal’s depiction of the immigrant experience, with affectionate mocking of the stereotypes perpetuated by both Indian and American cultures. Watching her husband lecture at the university, Ranjana is horrified to witness the inattentiveness of his students: “not even an Indian kid was paying attention to her husband’s chemistry lecture. What if this kid failed the course? That would be the end of India as an emerging global superpower.” A gentle side-swipe at a friend leads Ranjana to reflect that “they’d read Midnight’s Children in a two-person book club a year ago, and as a result, Indira Gandhi had become Seema’s go-to political reference for any manner of occasion, even and especially if the reference didn’t make any sense.” Amongst the emotional complications of families and the difficulties of cultural assimilation, Satyal finds plenty of targets for this gentle wit, and it plays a big role in adding to the entertainment of the novel.

There’s something really pleasant about finding a book in which character development is the primary focus, and No One Can Pronounce My Name delivers in this sense; additionally, Satyal’s characters are subtly drawn, allowing the reader to get to know them organically. There’s plenty of drama in the relationships and interconnected lives of these characters, and all of it is believable; as a novel which is, by turns, both emotive and humorous, No One Can Pronounce My Name offers a very satisfying reading experience.