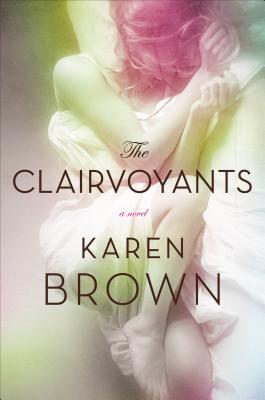 I’ve read many fine mysteries in my time, among them those that feature eccentric amateur sleuths, tough private eyes, sensitive police officers and quirky pathologists. But I’ve never encountered a murder mystery quite as intriguing as Karen Brown’s The Clairvoyants. For one thing, it’s not clear that it is a murder mystery, or even that there are suspects in a crime, until about midway through the book. Also, it concerns two separate murders, one committed in the past and one in the present by different people. Despite this lack of “whodunit” feel, I found myself willingly snared into reading about the strange lives of the characters and fascinated by Brown’s excellent storytelling technique.

We first meet Martha (our narrator) and her sister Del as children growing up on a Connecticut estate where their great-grandfather has leased a large tract of land to “The Spiritualists by the Sea,” a semi-religious paranormal group who have built cottages and a church on the site. One of the tricks the girls like to play is to hold mock séances for the spiritualists in which they pretend to contact the dead, hoping to pick up enough cash to buy lipstick or chewing gum. But Martha soon realizes that she is actually sensing images of the dead, and her messages from the beyond are more accurate than sham mediums could produce.

The girls grow up in an unusual environment, and their family and friends are peculiar. There is the grandfather who made his living by selling lightning rods, an odd but I suppose necessary occupation. There is a great-aunt who is a nun who sits in the barn reading her missal while the grandfather works. The children’s mother seems distant and dysfunctional, though two other sisters grow up to have kids and live relatively “normal” lives. Then there is the estate itself, which is remarkably posh, with its gingerbread cottages built by the spiritualists, a beach, a swimming pool, and an adjacent golf course.

Fast forward several years. We learn that Del has had a breakdown and been sent to an inpatient psychiatric facility. Martha moves away to Ithaca to study photography at the university. She rents a room in an old house with a peculiar pot smoking landlord named Geoff who has a habit of lending his beat up old car to his friends and tenants. Through Geoff, Martha meets Anne, a terminal cancer patient living in the small town of Milton. She serves as a kind of surrogate mother to a group of attractive young women whom Martha refers to disparagingly as the “Milton girls.” Alcohol, cigarettes, and marijuana are dispensed freely at their get-togethers.

Then Del returns. She has checked herself out of the facility and has come to find her sister, but she rapidly, and with more enthusiasm, takes up with the Milton crowd, though she sublets an apartment in the same Ithaca building as her sister. Their relationship is interesting. Martha’s mother wants her to look after Del, but Del seems to be the one pulling the strings and brings Martha along to the Milton gatherings. When Del heads off on her own after one of these, we get a sense of Martha’s love/hate relationship with her sister as she drives home alone in Geoff’s car:

Del didn’t have a cell phone, and I didn’t know the town well enough to find her, although I could guess where she’d gone with the owner of the Firebird—some unmarked road leading to a lakeside, or up a rutted, abandoned cart path to some dark field to have sex. I could only hope that Randy was, as Geoff suggested ‘a good sort,’ and I gave up, finally, and found the main road out of the village, following Geoff’s directions back through the empty stretch of open land, past the garden store with its sheds for sale, its lawn statuary, its jewel colored globes shimmering. Del wasn’t an innocent. She always went after what she wanted, while I waited behind, the cautious bystander, embarrassed by the virginity I kept a secret. ‘Sister,’ Del would call me, after our great-aunt, and it annoyed me just to think about her saying it.

From the start, it is clear that Martha has the gift (or curse) of seeing dead people. This, to a great extent, isolates her from the others, and we sense her self-imposed distancing of herself from those around her. Strangely and impulsively, she marries William, a photography teacher at the university and one of Anne’s friends. This comes as an out-of-the-blue surprise, given her lack of previous close relationships and her ambivalence toward William himself, with whom her affair is almost strictly sexual. William is photographing a series of “sleep studies,” the nature of which is only gradually revealed, as he is highly secretive about them, not even showing the prints to his wife. We sense the tension in their marriage almost immediately, as in the following quote:

Upstairs, I found William loading film into his camera. He whistled at me as I walked in. ‘Look at you,’ he said.

‘You like it?’ I crossed the room, pivoted like a model on a runway, and walked back to the door. ‘It will be perfect for the hunt.’

He laughed. ‘I forgot about that. Do you want me to bag you a hare?’

‘Is that how it works? The men kill a harmless creature as a token of their love?’

He held up the camera, advancing the film with his thumb. ‘Marriage isn’t suiting you,’ he said.

Where once I would have felt guilty, at fault for failing to be the wife he’d expected, I felt only anger. I unzipped the dress and let it fall to the floor. ‘I want a white one.’

‘That’s a snowshoe,’ he said, curious, unsure. ‘Given the foxes haven’t eaten them all, I’ll see what I can do.’

The book continues with Martha trying to extricate herself from her new social and marital entanglements, but not before she has uncovered the bizarre secret of the Milton crowd and landed herself in serious danger. Her relationship with Del becomes strained, and we see yet another role reversal between the sisters. Flashbacks reveal that there is a sinister aspect to Del and Martha’s childhood. All this developing tension leads to a climax which is chilling, to say the least.

At certain points in the novel, Martha reminds me vaguely of Meursault in Camus’ L’etranger, observing things happening around her without ever really having an emotional stake in them. Brown’s choice of uncomplicated sentence structures and vocabulary emphasize this detachment, and the almost Spartan language works well to develop the sense of isolation and desolation that Martha experiences as part of her gift. This applies to the atmosphere of the book as well, where the descriptions of fall and winter settings become all the more eerie through almost scientifically precise details. Because of Brown’s adroitness in using a detached perspective, and because the killings work mostly as devices to develop character, I am inclined to classify The Clairvoyants as a literary novel with murders in it rather than a murder mystery in which detection of the crimes plays the central role. It is a haunting novel, unlike anything I have reviewed for Fourth & Sycamore, though perhaps somewhat akin to Rebecca in terms of the unfolding of the plot. I recommend it highly not just to fans of sophisticated mysteries, but to readers who like sophisticated novels in general.

Karen Brown is a relative newcomer to the fiction market, and has published a couple of short story collections and one previous novel. Her collection, Little Sinners and Other Stories, was a Publisher’s Weekly Best Book of 2012.

The Clairvoyants was published by Henry Holt in 2017 and is available now at Greenville Public Library.