Regrets and the Royal Rugged Deluxe

She wanted to write a love letter.

She tugged at the chord on the desk lamp. A golden circle of light unfolded under her typewriter.

She ruffled her dark, Roman-Holiday hair-cut and remembered his stubble.

She cranked heavy, vanilla paper into the even heavier machine.

She bit the pearly, smooth nail on her left ring finger, and remembered the creases at the corner of his eyes.

She felt his hands on her as she settled into the smooth concavity of the old wooden stool. She bit her lip and placed each finger precisely over its appropriate home key.

Her eyes focused on the wavy, thick glass of the window. She did not see the autumn-clad aspens waiting for winter coats in the dusk.

After several frozen minutes, she began to type with the rhythm of a particularly percussive pianist.

The words softened into swirling sighs as they spooled through the air. 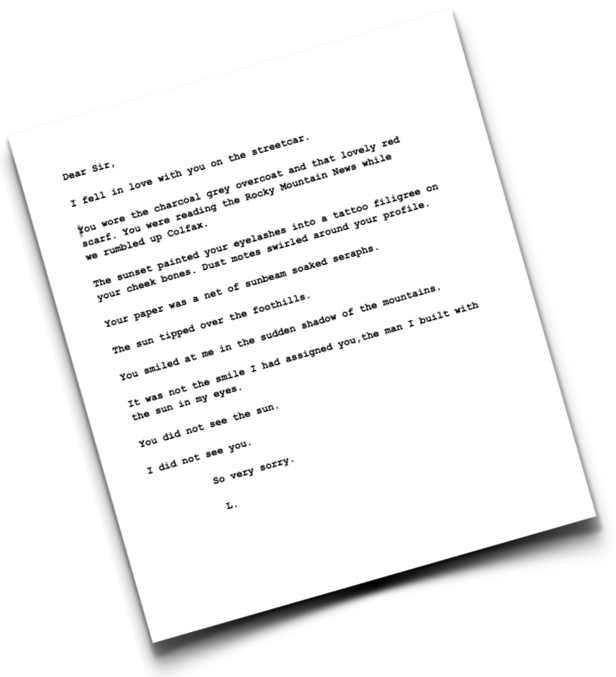 She folded it into rasping, creamy thirds, and stepped across the shadows to place it on the polished entry table.

She undressed her finger. The golden circle clicked lightly into its reflection.

She blinked at the clock in a rush of deflated relief that made her eyes damp and sent a million images scattering from her insides.
She smoothed her full, black, woolen skirt.
Cleared her throat.

The rumble of an engine sent two growing golden circles towards the emptiness that had recently housed her feelings. They swept the front window and sent shadow aspens scuttling across her pale face.

She slid into her red overcoat, and picked up her silver-zipped suitcase.
She stepped into the blue vacuum of the next night.

One heart shaped aspen leaf settled onto the dark floor behind her with the echo of the door.

The house was dark when he walked up the drive that night, his shoes disconnected echoes of dusk’s tires. He frowned into the lines on his face.

The door swept in on too-eager hinges, spilling a quarter circle of night on the boards.

He hung up his grey overcoat and the red scarf she had given him every Christmas.

A single, golden leaf cracked under his shoe.

He sent his smoky fedora sliding across the entry table.

Its brim drew his squint to the glowing circle he once gave a stranger.

His eyebrows shook his face into a facade she could not have predicted, faced now with the creamy, refracted creases of a love letter.

Jamie Paul is a librarian, teacher, writer and artist who lives outside of Flagstaff, Arizona in a little house that feels like a tree house and is mostly structurally sound. She loves to hike, take pictures, read, write, draw, and come up with grand plans to solve the world’s problems. She does not know how people live without pets, and shares her home with a perfect dog named Minute, a lion cat named Opie, a Dragon cat named Norbert, and a princess cat named Derbie. She can sometimes be heard telling warring cats to “get their lives together,” and is earnestly waiting for them to comply. Jamie has also lived in and around Denver and Houston. She grew up in Sierra Vista, Arizona, and Woodbridge, Virginia. She has published another short story in the Narrow Chimney Anthology, as well as several children’s picture books available on Amazon. Her YA novel, centered on two young women separated by 100 years who find themselves amid surprisingly similar political and social turmoil  is currently available as a kindle e-book.