Sharp: The Women Who Made an Art of Having an Opinion by Michelle Dean

A Review by Pam Munter 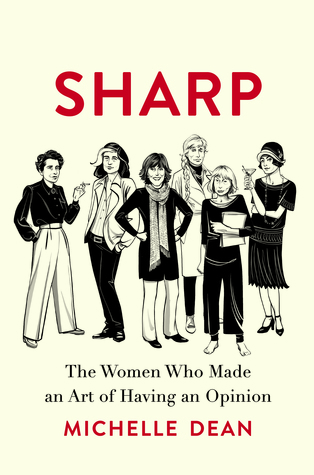 Let’s say you are bright, witty, bold, iconoclastic and irreverent. Sometimes your opinions and observations can roil the feelings of others, especially if they’re accurate. If this is true of you, Michelle Dean has gifted you with a set of reassuring stories about cantankerous like-minded women in Sharp: The Women Who Made an Art of Having an Opinion (Grove, 2018). But even if you’re not the outspoken person you’d like to be, you might savor this fun and engaging journey through the often-connected lives of some of America’s most noteworthy and influential literary women. Some of them were friends but, given the prickly personalities described here, it comes as no surprise that difficulties arose. These women could anger people without really trying.

Dean briefly outlines the lives of ten iconic women, discusses their literary output and, on occasion, their relationships with one another. She opens with Dorothy Parker whom she places at the beginning because she was, in one way or another, a notable influence in nearly all the others’ lives. Both Parker and a later subject, Nora Ephron could be described as writers who turned bad experiences into witty stories. Ephron had a direct link to Parker though her parents, also prominent writers. Parker would visit the Ephron home and became a source of fascination to the young Nora. “She was frail and tiny and twinkly,” she would later write and loved the fact Parker was often the lone female voice at the intellectually sumptuous Algonquin Round Table.

Parker’s name comes up often, if only to compare and contrast the writings of the other writers. But actually, there are more similarities than differences. While the style and genre might vary, these women were sarcastic, iconoclastic and often glib, usually juggling volatile relationships with men. Though many were ambivalent about feminism, “Whether they knew it or not, these women cleared a path for other women to follow.” She dubs them “elegant arguers,” the epitome of smart, sharp thinkers. They came from similar backgrounds – white, often Jewish, middle class families. All were denunciated by men who were threatened by their tone or their dominance on the literary scene, and each defended herself with word scalpels vanquishing their enemies, needing neither epithets nor profanity. They knew how to be lethal and (mostly) civil at the same time.

Dean is most effective when she discusses the interactions these writers had with one another. After giving Pauline Kael and Joan Didion their space, she informs us that they were critical of each other’s work, fueled in part by their competition for review space in the same magazine. Hannah Arendt and Mary McCarthy were friends, leftists widely criticized by men. Arendt was called “Hannah Arrogant” by a male critic; McCarthy was labeled “full of malice,” and in possession of “a chiseled style.” Most famous, however, is the snarky line Renata Adler used to describe one of Pauline Kael’s collection of film essays: “…piece by piece, line by line and without interruption, worthless.” Dean reminds us that, “Adler’s words…would appear in every obituary when Kael died in 2001.”

The chapters in which each writer is paired with someone outside the book’s original purview are far less successful. Rebecca West’s life seems overshadowed by the brief story of Zora Neale Hurston with the latter seeming an afterthought. Later, there’s an attempt to connect Arendt, McCarthy and Lillian Hellman but by now, readers may have character fatigue. These sections have the feel of a term paper with overly cluttered prose.

With all these three-dimensional heroines, it would be easy to overlook Dean’s own prowess in provocative synthesis. In the chapter about Hannah Arendt, she writes, “The pointlessness of life and the abruptness of ends were things that came up a lot in Arendt’s life—much as they had in West’s and Parker’s.” She also mentions that, though disclosive essays were intrinsic to both Didion and Ephron, neither revealed a significant family secret until much later in their writing lives: Didion’s father was institutionalized when she was away at college; Ephron’s mother was a vengeful alcoholic, leaving Ephron in fear of her. Most of these women, Dean discovered, had been film critics in the course of their writing careers, another curious coincidence.

Dean’s not above offering her own literary criticism. About McCarthy’s most famous novel, The Group, she says, “It doesn’t quite work as a novel,” the primary reason being that it was “psychologically uncomplicated.” Of Rebecca West, she opines, “She was one of the only women who were considered experts on grave matters of state. But she made mistakes. Her obsession with anti-Communism was just one of them.” Her gratuitous literary critiques seem out of place in chapters already laden with the opinions of others and add little to the discussion.

The writer who seems outclassed in this book is Janet Malcolm, best known for her “fact pieces” in the New Yorker. Many readers might learn first about her work here along with the controversies surrounding some of her essays. Her life and career seem to matter less to Dean than some of the others. She’s at the end of the book and could easily have been edited out.

On occasion, the reader is left with questions. Dean writes of McCarthy, “All her life (she) was a recognized expert at conversation. She and Parker had that knack for talk and parties in common.” Curiously, Didion was a notorious party-giver, too. We wonder if, contrary to conventional wisdom, if she’s suggesting a connection between extraversion and literary talent? And Sontag is described as “exceptionally good looking” while Rebecca West’s sometimes disheveled persona is implied to be a possible deterrent to success. “There was something about who West was in prose that promised people something they then felt distressed not to see materialize in person.” Dean misses an opportunity to address the differing cultural standards between men and women in this regard, leaving us to wonder how appearance might have played a part in their work, not to mention their lives. We don’t read about Sontag’s long relationship with photographer Annie Liebowitz, either, surely a major factor in her support system and in her work.

These women generated fervent responses, both from readers and from their employers. Perhaps the most beloved was Ephron, Parker appreciated mostly post mortem. Kael, Adler and Didion emerge as people you’d love to sit next to at a dinner party but perhaps not befriend.

Feminism is a common thread woven intermittently throughout. Some embraced it, others criticized it. As Dean summarizes, “Feminism is, yes, supposed to be about sisterhood. But sisters argue, sometimes to the point of estrangement.” With her finger lightly resting on the pulse of her readers, Dean opens with the promising dedication: “For every person who’s ever been told, ‘you’re too smart for your own good.’”

Pam Munter has authored several books including When Teens Were Keen: Freddie Stewart and The Teen Agers of Monogram (Nicholas Lawrence Press, 2005) and Almost Famous: In and Out of Show Biz (Westgate Press, 1986) and has been a contributor to many others. She’s a retired clinical psychologist, former performer and film historian. Her essays and short stories have appeared in over 70 publications. She has an MFA in Creative Writing and Writing for the Performing Arts and is a Pushcart Prize nominee. Her memoir, As Alone As I Want To Be will be published by Adelaide in October.