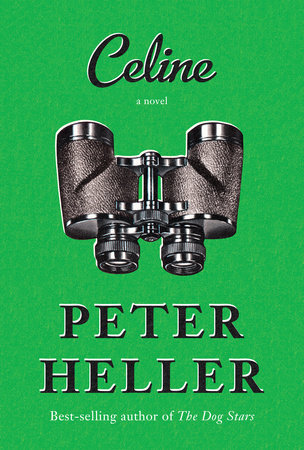 To paraphrase Sherlock Holmes: I see, but Peter Heller observes. What I mean is that whenever I go on a trip to, say, a museum or national park, I tend to take a general impression away with me—that was beautiful; I so liked the painting; did you see that herd of elk? In Celine, Heller uses formidable powers of observation to bring to life details of the natural world that might otherwise be glossed over by a hurried observer. He has a photographic eye when it comes to composing scenes of the outdoors. This is the aspect of the book that I take most strongly away with me.

The plot of Celine is simple, and is a common one for mysteries. A photojournalist was ostensibly attacked and killed by a bear just outside Yellowstone National Park. All that is discovered are some footprints, torn clothes, and small amounts of blood. The journalist’s daughter, Gabriela, isn’t certain her father is dead, and asks private eye Celine to help find him. The trail is cold, as the supposed death happened two years before, and only now is Gabriela asking for help. The bulk of the plot is an intense race to find the journalist in the wilds of Wyoming and Montana. It turns out the man is wanted by the government as well, and the CIA may be intending to kill him if he is still alive.

Celine is set in 2001, in the ten days or so after September 11th, and, in fact, Celine’s New York apartment faced the towers. The significance of the timing is a little unclear, as the bulk of the action takes place well away from New York, in places where people seem less aware of the tragedy. The date does add an additional edge of sadness for Celine, who has also seen her two sisters die that year from illness. Celine is an unconventional private detective. She creates sculptures out of taxidermy animals and human skulls. She is an expert with guns. On her first stakeout, she used a pair of opera glasses because she had misplaced her binoculars. She is 68 years old, and a member of one of the old money families of the northeast United States.

This is the second part of Celine that made an impression on me: the characters. When he isn’t describing lush vistas between Denver and the Canadian Border, Heller often delves into the background of Celine, showing how she became the tough woman that she is. She seems hard in some ways, softer in others. Here is how Peter Heller sums up Celine’s approach to detection:

When Celine was on a case she observed many things closely, it was reflex—gathering everything up in the baleen of her intelligence. It both kept her in practice and sometimes gleaned useful and even crucial information. As for her and Pete, nobody seemed to notice them much, though they were clearly ‘from away’ as Pete would say, and this was also good. One of the things that happens to people as they get older, and especially to women on the other side of middle age, is that people forget to notice. If Celine wanted to be virtually invisible she could be. She was also gorgeous and striking and if she wanted to make an impression she could do that, too. Also useful.

She loves her husband and professional partner, Pete, a Maine native of few words, who is an excellent map reader and very logical in his summing up of the characteristics of the different people involved in the case. Celine and Pete make a wonderful pair, not quite Holmes and Watson, as Pete is more luminous than Watson, and Celine is better with a gun than Holmes, but they are charmingly domestic as well as being a curious pair of heroes.

Celine was a longtime smoker and suffers from the high altitudes of the Rocky Mountains. frequently needing an oxygen condenser. She has a curious way of talking people down from inflammatory situations, mostly by putting on her old family airs and making the assailants feel ashamed. The scene where she embarrasses a biker into putting away the knife he was threatening her with is priceless.

Celine was deeply affected by a teenage pregnancy and having to give up the child for adoption. A later pregnancy brought her son, Hank, an outdoorsman and short story writer, who becomes curious about his unknown sibling, and in a series of flashbacks, we learn of his investigation into what became of her. Heller expresses the family dynamics well, describing the peculiarities both of Celine’s clan and the young Gabriela and her father. Celine is about families, and about the mysteries and secrets that can evolve over time with the ones we love.

I wouldn’t describe Heller’s work as a literary masterpiece. There is a rather odd use of present tense at the ends of a few paragraphs, which makes for confusing reading, as it isn’t consistent with the firmly past tense novel. He occasionally struggles with sentences that seem like they should be just a bit more elegant. More often, though, he comes up with a dandy turn of phrase, like the following:

Celine thought of the great blue heron in Baboo’s cattails, just below the porch. How the bird would stand, it seemed, for hours, neck stretched over the shallows in effortless balance between stillness and strike. Because the strike would inevitably come. Celine used to think that if eternity was anywhere it was somehow contained in the attitude of this bird. Everything the heron had done, and would do, and was now so perfectly not doing, was contained in her bearing.

Celine is an eminently readable piece, fast paced and engrossing. For those who like a “road trip” adventure to their mysteries, this is a marvelous choice, even if you are merely an armchair traveler. I’m now ready to follow Celine’s and Pete’s route, which I have no doubt I could do, as Heller’s descriptions of an area he knows well are so precise.

Heller is a well-known journalist and adventure travel writer, who frequently contributes to NPR and National Geographic Adventure, among other outlets. He has written another literary novel, The Dog Stars, as well as a number of nonfiction works describing remarkable places around the world. He lives in Denver.

Celine was published is 2017 by Knopf. It is available now at Greenville Public Library.