(Book Review) A Carnival of Losses… by Donald Hall

A Review by Pam Munter 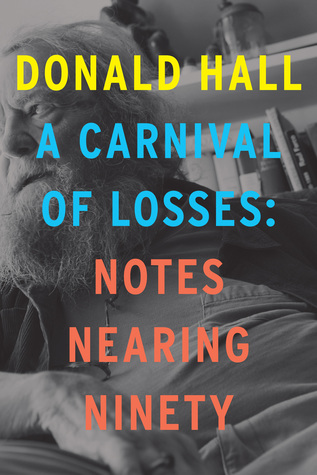 It might be considered unseemly to criticize a 90-year-old writer, especially one like Donald Hall who leaves behind more than 50 books from multiple genres and is an internationally celebrated former Poet Laureate. It’s like faulting Frank Sinatra in his last few years when he could no longer remember the lyrics to the songs he made famous, struggling to coax his sonorous baritone outside its decreasing range. It happens that Hall’s final book, A Carnival of Losses: Notes Nearing Ninety (Houghton Mifflin Harcourt, 2018) was published just a month after his death and, judging by its content, Hall knew this would be his final work. It’s as if he peered into the emptying barrel of his life for one last look, and extracted the remnants with unedited urgency. The result is an uneven, almost free associative mélange of essays.

He opens with a short chapter in which the sentences begin with “You are old when…” Among them: “You are old when the waiter doesn’t mention that you are holding the menu upside down.” Bada boom. It’s a series of rimshot one-liners, creating the expectation this book will resemble a 1950s sitcom or a standup tryout. Many of his comments are funny, to be sure, self-deprecating and trenchant. He writes, for instance, “When I stopped writing poems, in 2010 or so, it was a relief. Quality had diminished along with testosterone.” And yet, the ongoing grief for the death of his second wife, poet Jane Kenyon from leukemia at 47, arises repeatedly, serving as his existential axis. He has written often about their lives together over many years, including at least one other memoir and several books of poetry written in tribute to her memory.

Those unfamiliar with both his writing and his life will require further informational grounding outside this work. The writing bounds randomly across eras, with frustratingly incomplete contexts and connections. The most riveting essays, unsurprisingly, are in the present, as he chronicles the wrestling match with his diminishing capacities, following a life of prodigious output. He laments, “Today I am forty years older than Jane ever got to be, and I realize that I haven’t finished reading a book in a year…Striving to pay the mortgage in the late 1970s and ‘80s, some years I published four books. Now it takes me a month to finish seven hundred words.” While this is strong narration, it’s lacking in emotional texture. The reader can project affect into these statements, of course, but the lack of first-person disclosure is distancing, leaving us a step removed. While he repeatedly celebrates his solitude, we don’t understand why or how that adds to his quality of life; to a casual observer, it seems more like a retreat from the demands of a life he can no longer navigate with ease.

Among the disparate chapters are not one but two essays about his denture difficulties. In another, he asks himself, “What is the worst thing I ever did?” He confesses a mere misdemeanor—he shushed his son and shoved him aside, calling him a “bad boy” for interrupting his writing. But later, he re-evaluates the “worst” to be fingering a fellow American as a Communist during the McCarthy Era. Labeling and describing a difficult situation it is not the same as feeling or processing it in a personal manner. Perhaps these stories were covered better in earlier memoirs; but the Hall novice reader craves more Hall right here.

The middle section is a tedious series of short recollections and judgments about his poet contemporaries, some of whom may be unfamiliar to the non-poet reader. The stories lack dimension and reek of the random contents of his cognitive trash bin. The settling of scores is obvious. Of poet Allen Tate, the entire essay reads, “My recollection of sole poets is brief. Allen Tate always looked grumpy.” Even his potentially rich stories about William Faulkner, Ezra Pound and John Steinbeck lack insight and color. He made several appearances with Garrison Keillor on the famed radio program, “Prairie Home Companion,” and with him in live performances, but we don’t get enough about the apparently complicated dynamics between them.

As the book draws to a close, so does Hall. He’s hospitalized multiple times, confined to a wheelchair, requiring a caretaker. Here we see more of the mordant, his go-to coping mechanism. During an X-ray, he glibly refers to the technician documenting his “corpse to be.” When he begins to construct his own post-mortem memorial to be held in New York City, he writes, “For half an hour I listed and unlisted speakers. Most were dead.” Acerbic, yes, but what must it be like to orchestrate how you will be celebrated upon your death? He wrote as many as 12 letters and emails a day, apparent reassurance that, “Maybe I was going to die, but not right now.” To Hall, behavior is easier to describe than emotion but it’s the latter that seems to be lacking in this cut-and-paste work. Who was he?

In the last few pages, there are some glimpses of what might have been.  When he describes a 160-year-old elm tree that falls over in the yard of the house his family has occupied since the Civil War, he acknowledges that he had hoped to outlive it. So as a gift to his granddaughter and her husband, the inheritors of the homestead, he arranges to plant a four-foot elm sapling in its place. “The sapling came with a bronze plaque inscribed to the future tenants, to be affixed to the elm’s eventual trunk. I am free to imagine another grandchild swinging from another branch of another tree.” A bronze plaque? But what about the tender feelings within that must have accompanied this gift?

The book, like his earlier best-seller, Essays After Eighty, offers encouraging proof that creativity can flourish throughout the lifespan. But for a memoir about edging toward death, it’s oddly bloodless. He opts for the sardonic gag line. The emotional moments are sporadic and fragmented; he strides to the edge of the chasm, concocts clever and lyrical ways to describe it, then retreats without fully engaging either his gut or ours. It’s a loss for his readers, most especially for those whose only exposure to this impressive writer is this work. A subjective guide to life’s end-stages from an eminent wordsmith would have been welcome, instructive and even inspirational to all of us who hope to live to 90 and beyond.

Pam Munter has authored several books including When Teens Were Keen: Freddie Stewart and The Teen Agers of Monogram (Nicholas Lawrence Press, 2005) and Almost Famous: In and Out of Show Biz (Westgate Press, 1986) and has been a contributor to many others. She’s a retired clinical psychologist, former performer and film historian. Her essays and short stories have appeared in over 70 publications. She has an MFA in Creative Writing and Writing for the Performing Arts and is a Pushcart Prize nominee. Her memoir, As Alone As I Want To Be will be published by Adelaide in October.